Retiro park or el parque del buen retiro forms a green oasis of 118 hectares in the heart of Madrid . Conveniently located and easily accessed from the barrios (districts) of Goya and Salamanca and immediately behind the main MUSEUM and ART GALLERY zone it is a popular refuge for turists and Madrileños alike.

Free access throughout daylight hours all year around and the presence of its own metro station, “Retiro”, means there´s no excuse not to visit!

Continue reading for information on:

...and all of this accompanied by various photos of Madrids central park.

The park started out in the 1630s as being a private garden to the East of the then village of Madrid used solely for the entertainment of the court of the Royal Family then headed by Philip the 4th (Felipe IV). Naturally the king Philips first move was to construct appropriate accommodation with the investiture of a new Royal Palace (the palace was later destroyed by the troops of Napoleon in 1808). During this time the area was heavily wooded and distinctly cooler than the built up area of Madrid .

Since its inception the park has been continuously changing and updated dependent on political will or the need to commemorate. Major milestones in the history of Retiro park include: 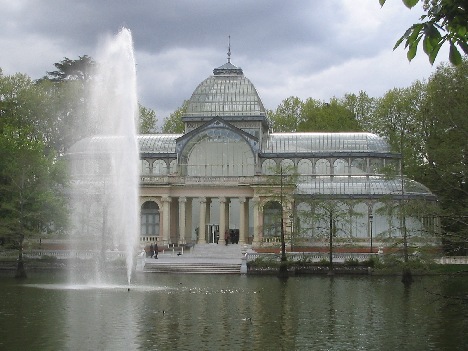 Quite apart from allowing one to escape the summer sun in Madrid Retiro park is a thriving meeting and sports center for the people living in Madrid . Its quite normal to hear Madrileños say: “Lets go for a walk in Retiro”.

With its large area the park offers many different activities incluiding:

However even with all these activities Retiros charm is still simply walking around admiring the statues, monuments and plants!

Starting in the last weekend of each May the park plays host to Madrids book fair ”Feria del libro” until mid June. This book fair sees the parks thoroughfare turned into a series of small bookstalls and daylong activities. More on this can be found at the official Madrid book fair site:Feria libro

Retiro park won´t occupy the kids for the whole trip so check out our theme park guide....

FacebookTwitterPinterestTumblrRedditWhatsApp
Explore 100's of pages about Madrid via the Sitemap ...> © 2006-2012 www.Madrid-Guide-Spain.com