Madrid Spanish restaurants are both cheap and easily encountered a walk along any street will see you passing a restaurant every three or four storefronts, such is the frequency with which madrileños dine out.

Reservations are only needed in the most popular of restaurants or if its is a Thursday, Friday or Saturday evening. Thankfully the selection of different Spanish traditional cooking available is wide and constantly evolving so that no two Madrid restaurants are alike!!!

One important tip to remember is that the majority of Madrileños do not go out to eat until late in the evening. More so in the summer where you can find people entering restaurants at 2300!!! 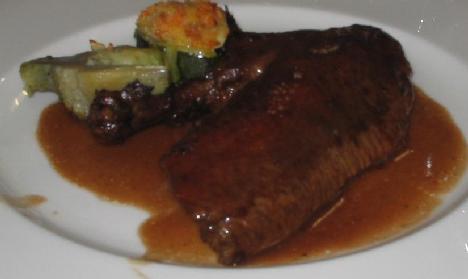 With Madrid being the center of Spain its traditional restaurants include many different styles from various parts of the country. You can enjoy Salmorejo (a tomatoe, olive oil, jamon and bread dish) in any one of Madrids numerous Tabernas Andaluzas or indulge in something from the North of Spain in one of Madrids seafood restaurants. Traditional Dishes:

Cocido Madrileño
Cocido Madrileño is a type of soup or stew in which chickpeas are cooked in a broth of Meat and Potatoe. The meat used is always small portions of salted "jamon" that was left next to the bone on one of the dried pigs legs you see hanging on the walls. This part of the dried ham is supposedly the richest although the bones prevent its being cut it the typical slices. Although not a spectacular dish to look at the taste certainly is!

Chuleton
The Chuleton is a huge Rib eye steak with the best meat coming from the Northern Spanish provinces of Asturias and Pais Vasco. Typically a Chuleton weighs in between 1.5 and 3 kg or 4 to 7 lbs. Even allowing for the proportion of bone encountered this is a hearty Spanish meal although if you enjoy it with its typical beverage of Asturian cider you may be tempted to share!

Fabada Asturiana
The Fabada Asturiana is similar to the cocido Madrileño except that it replaces chickpeas with white beans. It also has a touch of the exotic by incluiding slices of spicy Chorizo sausage and Morcilla blood sausage.

These are our personal favourites where the quality to cost ratio is at its best! Feel free to suggest your own favourites!

El Pimiento Verde Sidrería Vasca
Address: Calle Lagasca, 46
Telephone: 991 576 41 35.
Opening Times: Midday to 5pm and again from 8pm to Midnight. Closed Sundays.
Specialities: Typical Basque cooking along with the ever welcome cider direct from the barrel and poured from a height.

One of our personal favourites due to its central location ( Metro: Goya, Serrano) and informal atmosphere. Prices are very reasonable at around 25-30€ per person.

El Patio Andaluz
Address: Calle Arlabán, 1
Telephone: 91 531 22 81.
Opening Times: 8pm to Midnight. Closed Sundays (all day) and Saturadys at luchtime.
Specialities: Typical dishes from the sunny south of Spain, Andalucia, El Patio Andaluz is typical of a Madrid spanish restaurant in which you can study the bulls heads adorning the walls and examine the detailed painted ceiling.

Right in the center of Madrid ( Metro: Sevilla) this is one of Madrids most traditional restaurants although that hasn´t meant the prices going up with a typical meal being between 10 and 15€ per person!!

Extremadura (the province) is widely regarded as one of the last natural reserves in Spain and the vegetables and meat from this region is considered to be some of the richest around.

Home cooked plates of "migas" (pieces of bread lightly fried with pork, garlic and red peppers) are the typical starter before moving onto a selection of cuts from cured ham, sausage and tenderloin. Alternatively a pork "solomillo" is a tasty hot dish. Located just of Gran Via ( Metro: Chueca) this restaurant has been in existence for over 25 years and still maintains great prices at only 25€.

Other great Madrid Spanish restaurants can be found in the Seafood section..

FacebookTwitterPinterestTumblrRedditWhatsApp
Explore 100's of pages about Madrid via the Sitemap ...> © 2006-2022 www.Madrid-Guide-Spain.com